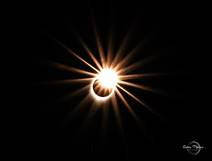 Star Date : 8.19.17
And so our Journey begins.  We left home at 5:00am under a pre- dawn crescent moon.  All of the research, stories and advise that we have received in the past few weeks all swirling through my head like a Asteroid in the galaxy (see what I did there😊 our plan came together perfectly after numerous emails, phone calls and media shows warning us about everything from forest fires, horrendous traffic, food/water shortages and even a story about bat attacks that will happen when the sky becomes dark….,YES you read that right BAT ATTACKS. We figured we would get a jump on the traffic and left before everyone. FAKE NEWS! We arrive 5 ½ hrs later with no traffic jams, no gas shortages and no problems.  We spent the rest of the day setting up our camp, meeting the neighbors and checking out the little vendor village in Solar Town. Our 20x40 site for $150 was a steal for the experience we are about to be part of with an estimated 10,000 plus fellow campers 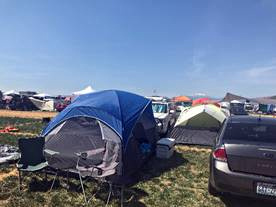 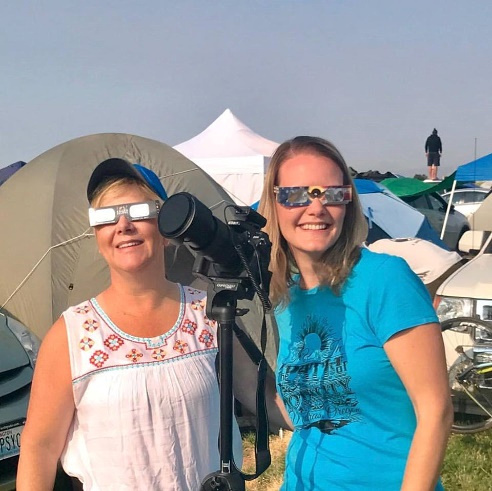 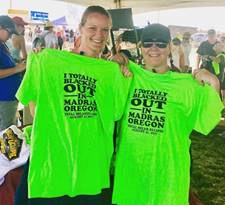 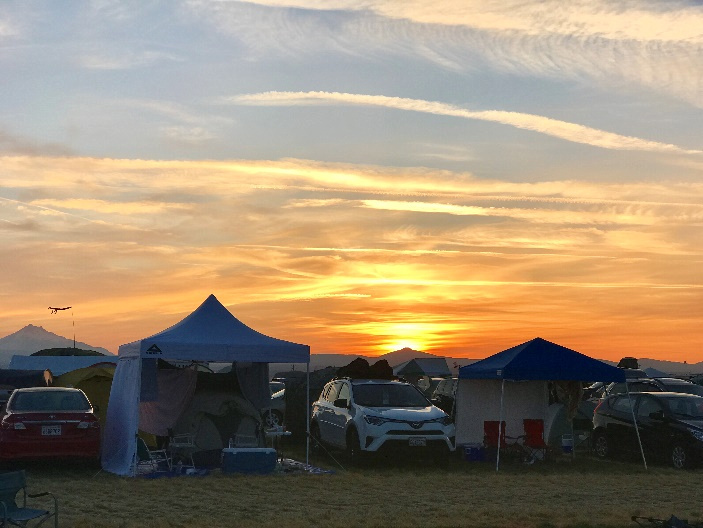 Star Date: 8.20.17
After a fitful night, my neighbor 10 ft from my head, almost close enough to nudge snored all night long. I woke up around 3:00am and the walk to the Loo was hysterical.  I was serenaded by what sounded like a million snoring people.  I really wish I would have recorded that experience.  Hysterical!!  We woke around 7:00am to what in my dream state sounded like Daenerys Targaryen’s Dragons breathing fire over Solar Town.  When I opened the tent door and found this (see below) I was very relieved 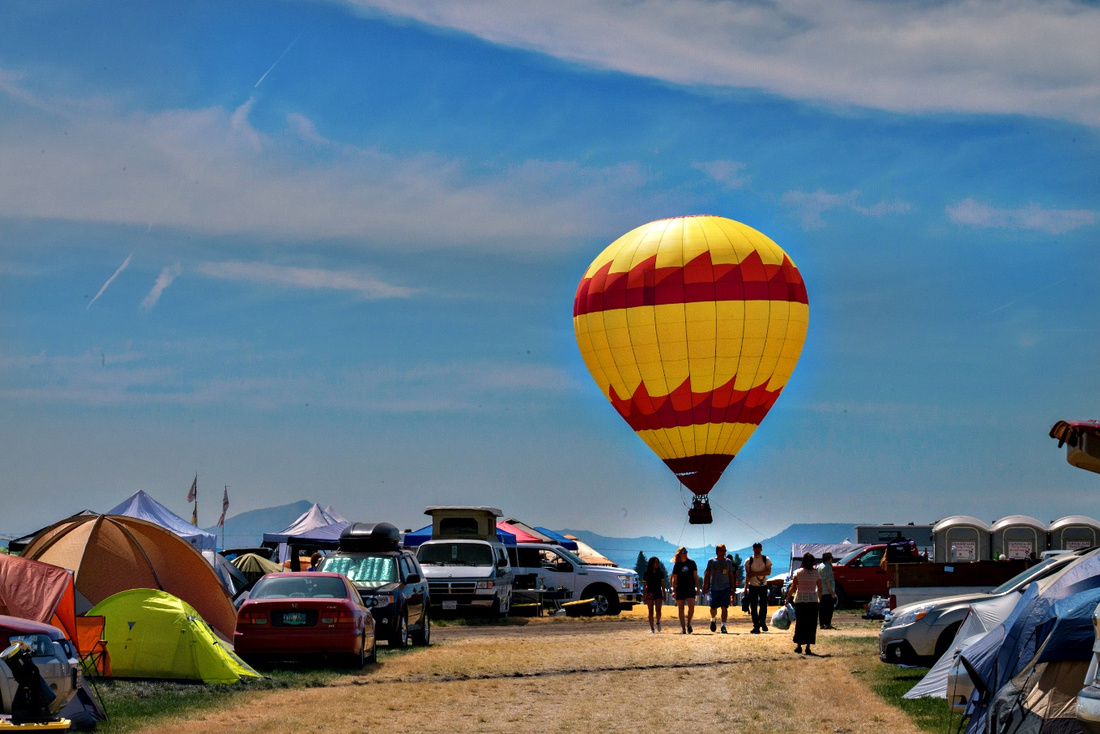 Did I mention that my Dream that night had something to do with Guy Fieri from the food channel questioning my belief in God and was yelling scripture at me… (what does that even mean)  weird.  We settled into our camp chairs and began people watching which was so entertaining.  Our early morning campsite smelled of Bacon, Sun Screen, Weed, Pachulia and Money.  The amount of high tech equipment that had gathered in this farmers field miles away from a city was beyond belief .  Nikon, Canon, Sony, all the telescope companies, lots of 1st time campers with the REI tags still hanging off their tents.  Honestly at times I questioned our decision just a little.  Afternoon came quickly and we found a  small local distillery in Solar Town that was selling pints of vodka so we made some cocktails with Water Kefir @waterkefirpeople  a water based Kombucha which was awesome and now selling at our local whole foods😊 .  I’d say this was very “Oregonian” of us.  We spent Sunday Evening at Solar Fest buying tee shirts and checking out the vendors.  Did I mention how friendly everyone here is…well they are.  Everyone without exception 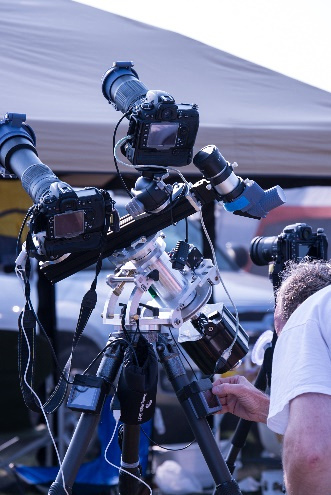 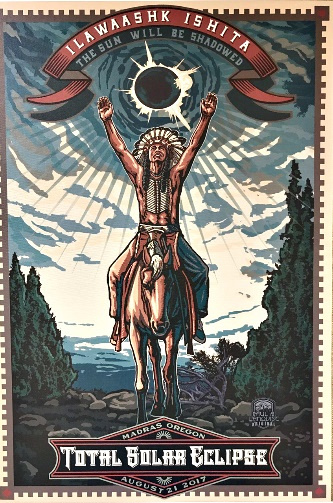 Star Date: 8.21.17
We woke up early with the excitement in the air feeling almost electric.  Everyone was busy fiddling with their cameras, telescopes, setting up the viewing areas with chairs, beverages etc… we were all getting ready for the big show. A guy named Ken walked by and told us about the Shadow bands and offered a big sheet of white paper which we taped onto the back of our car. Our neighbor across the way was busy making a pinhole viewer (see below) we made one that looked like a heart😊  Our hippy neighbor Jim from San Francisco was hotboxing in his little one man tent (Jim spent all week smoking weed, drawing pictures and looking for a brown pencil that he lost) 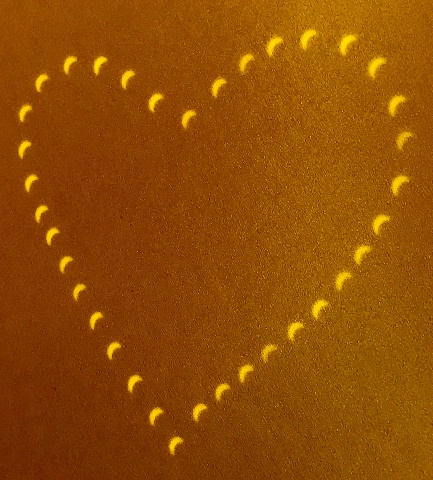 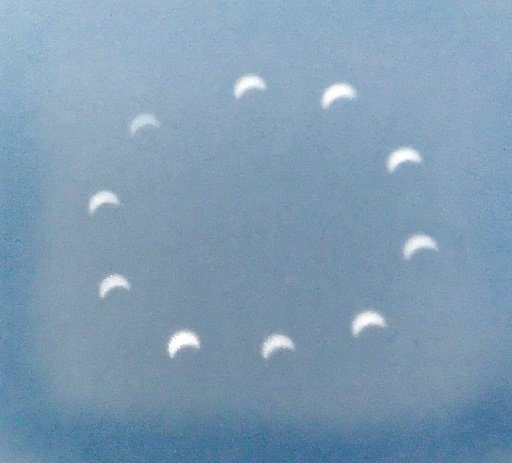 At 09:06:45.2 the crowd marked the beginning of the Solar Eclipse with a rumbling roar of clapping and whoops and hollers.  The show had begun.  Dawning our fashionable eclipse glasses all 10K plus people were looking towards the sun.  The site was absolutely beautiful.  As the minutes ticked away the temperature dropped and the skies became glowy dusky hazy, sometimes called the invisible light.  kind of like if your TV contrast was off a bit.  It continued to get colder and darker as the moon crossed over the sun.  Cameras were snapping, someone in the way back began to howl, soon the whole camp ground began to howl.  It was crazy.  At the moment of totality, it was like the lights went out.  It was dark, the temperature dropped a total of 14 degrees, stars came out and a 360degree sunset appeared… I couldn’t stop looking. 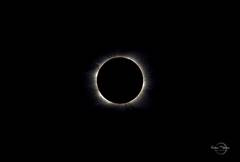 I snapped pics but found myself so mesmerized by what was happening before my eyes I was speechless.  The campground went quiet during those 2.02 minutes. The sight was everything and more. I can’t really put into words how I was feeling.  Yes, the feeling of how “awe inspiring this world is” and those “philosophical quotes” all resonate a bit louder now but somehow it was a personal life changing experience that I really didn’t expect.  (don’t judge me) .  As the Moon passed in front of the Sun and began to show itself in a flash, once more a rumbling roar came over the crowd .  Was it worth it?  Absolutely! Every minute of it! 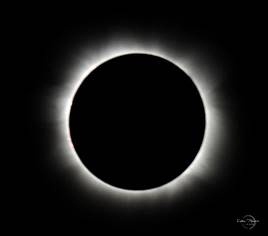 Sometimes, I think of the Sun and Moon as lovers, who rarely meet.

Always chasing, and almost always missing each other.

But once in a while they catch up, and they kiss,

and the world stares I awe of their eclipse.

Nu-Way Bin Rentals(non-registered)
I snapped pics but found myself so mesmerized by what was happening before my eyes I was speechless. The campground went quiet during those 2.02 minutes. The sight was everything and more. I can’t really put into words how I was feeling.
finchalex(non-registered)
I was serenaded by what sounded like a million snoring people. I really wish I would have recorded that experience.
Denise(non-registered)
Love your blog! And the pics are fabulous!
No comments posted.
Loading...
Subscribe
RSS
Recent Posts
TV Fork Magical Christmas Photo Sessions The Cat in the Christmas Tree Finding Peace Epic Eagle Wars on the Shores of Sandy Point Lantern Festival Della Terra Late Harvest Farm to table Dinner Pink Tractor Farm The Plum Tart Solar Eclipse 2017~SolarTown, Madras Oregon
Keywords
photoshoot photography spring duvall Lantern seasons smalltown bothell chef cody
Archive
January February March April May June July August September October November December
© Robin Marie Photography
Powered by ZENFOLIO User Agreement
Cancel
Continue